Buffalo Trace Demonstrates Another Way To Sour A Mash. 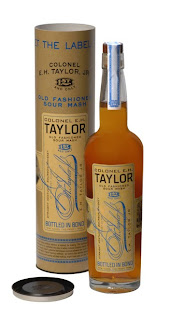 The repositioned brand’s first release is Colonel E. H. Taylor, Jr. Old Fashioned Sour Mash Bourbon Whiskey. It will be 9-years-old, 50% alcohol, bottled-in-bond, and $70 per 750ml cork-finished bottle. The bottle comes in a tubular canister similar to those sported by many single malt scotches.

But the product’s raison d’etre is the ‘Old Fashioned Sour Mash’ claim.

At this time I must issue a Geek Alert. This is about to get very geeky. Geeky and long. You have been warned. Continue reading at your own risk.

Colonel E. H. Taylor, Jr. (1830-1923) was a major figure in American whiskey history. Among his long list of accomplishments was ownership of the distillery now known as Buffalo Trace. It was under Taylor’s leadership that it became a major whiskey producer.

The Taylor name was disconnected from the distillery during his lifetime, by him, and only restored to it in 2009.

By coincidence, that distillery in 2002 conducted an experiment inspired by one of Taylor’s practices. In barrels ever since, that experiment has now been deemed a success and bottled.

Sadly, the history of American whiskey-making has been not well preserved nor very much studied. We have very little detailed information about distillery practices in Taylor’s day, which spanned the 1850s to Prohibition.

Taylor was a distillery owner and financier, not a day-to-day distiller, but he worked with people such as James Crow and other top distillers, and he had his own strong opinions about the best ways to make whiskey.

Normally, the term ‘sour mash’ refers to the use of spent mash to condition new mash by lowering its pH. Spent mash is what comes out of the still after distillation. It contains no alcohol, no fermentable sugar, and no yeast or other micro-organisms, but it does have other nutrients yeast can use and is more acidic than new mash. All of today’s major American whiskey distilleries use this technique, mixing old mash with new in a 1:3 to 1:4 ratio.

There are some obscure references in old literature to a ‘sour mash’ technique that doesn't use spent mash. Something else sours the mash. Mike Veach has noted references to this by Taylor himself in the Taylor-Hay papers, which Veach archived for Louisville’s Filson Historical Society. This confuses modern readers who equate sour mash with spent mash.

This subject has also come up with micro-distillers because some of them refer to the introduction of lactobacillus during mashing as 'sour mash,' even though no spent mash is used. Lactobacillus produce lactic acid, which has an effect similar to spent mash in lowering the pH of new mash to an appropriate level. Lactobacillus are used in the production of yogurt, cheese, sourdough bread, and other foods. They are also used in brewing. Before Buffalo Trace switched to dry yeast they used to add lactobacillus to their yeast mash, as some distilleries still do.

At Buffalo Trace, mash goes from the cooker into what they call a drop tub, where they can hold it before sending it to the fermenters. Usually this is just for timing, where a batch of mash might sit there for a couple of hours. In 2002, Buffalo Trace decided to deliberately let a batch of rye-recipe bourbon mash sit in the drop tub for several days, monitoring the pH level but otherwise leaving it alone.

Would the mash sour naturally? Is time just as good as spent mash at neutralizing new mash? Would the mash then ferment well and make good whiskey?

Because they were concerned about spontaneous fermentation and other possible contamination they planned the experiment for the end of a run so nothing else could be affected and they could clean up afterwards if it went wrong.

One difference from Taylor’s day was that back then they mashed in barrels, not the large mash cookers they use today.

To learn more they interviewed six different old-time employees, all then in their 80s and 90s. One was Al Geiser, who was the first master distiller there after Prohibition. Another was Ralph Dupps, who died in 2007 at age 90.

None of them had lived in Taylor’s time, but they all had heard stories about how the distillery didn’t use spent mash then but instead allowed their mash to sour ‘naturally.’ Dupps was the only one who really looked into it. A mechanical engineer by training, Dupps worked for Schenley at both Buffalo Trace in Frankfort and Bernheim in Louisville before going to Tennessee in 1956 to build the George Dickel Distillery. He considered using this technique at Dickel.

After a few days the pH was right and the mash was otherwise as it should be so they piped it to the fermenters, pitched their yeast, and everything after that was done in the usual way. They liked the taste of the distillate, even though it was different, so they decided to barrel it up. Nine years later, that is the whiskey they are releasing as Colonel E. H. Taylor, Jr. Old Fashioned Sour Mash Bourbon Whiskey.

This is similar to Woodford Reserve’s sweet mash experiment, which was released in 2008. They didn’t sour their mash in any way. Their yeast were able to adapt but produced a very different set of flavors due to the different environment.

In both the Woodford and Buffalo Trace cases, it’s a good experiment from a scientific standpoint because they changed one variable only, no mash conditioning in Woodford’s case and the use of time instead of spent mash to condition it in Buffalo Trace’s case.

The experiment doesn’t show us how Taylor soured his mash, but it demonstrates that it is possible to sour mash ‘naturally,’ without spent mash.

As for the Taylor name, in January 2009, Buffalo Trace parent company Sazerac acquired some assets from Constellation Brands which included the Effen Vodka brand. Beam Global, which owned the Old Taylor brand, wanted Effen so a deal was made. Buffalo Trace announced then that they would continue the existing Old Taylor product but expected to re-launch the line, up-market, sometime in 2010 using extra-aged rye recipe bourbon from existing stocks. (See my article in Malt Advocate, the Winter 2009 issue.) They are slightly late but this is the fulfillment of that promise.