Of Quercus Alba and Eumycotians 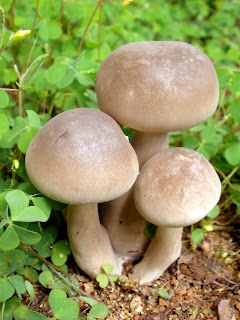 Mushrooms are tasty on pizza, battered and deep fried, or stuffed with crabmeat. Maybe you like grilled portabellas with polenta, or shiitakes in a stir fry, but probably not mushrooms in your whiskey.

Fair enough, but mushrooms do help your whiskey taste good. It has only recently become known that mushrooms, of a microscopic sort, play a vital role in the seasoning of white oak (Quercus Alba) for whiskey barrels. Scientists call it fungal colonization. It is an early part of the wood’s natural decomposition process.

The primary buyers of new oak barrels are wine and whiskey makers. Brown-Forman Corporation (BF) is the only whiskey maker that also makes barrels. They have a large cooperage in Louisville and are building another one in Alabama, strategically located close to some large stands of white oak and also that little distillery they own in Lynchburg, Tennessee.

Brown-Forman a few years ago stopped selling new barrels to other distilleries. Perhaps they’ll get back into that business after the new cooperage comes on line.

The other big barrel maker, which also supplies wineries, is Independent Stave Company (ISC). They are based in Lebanon, Missouri, but also have a large cooperage in Lebanon, Kentucky. (They give tours.) There are several others, all much smaller than BF and ISC.

Although cooperage is more automated today than it was 150 years ago, it still requires considerable skill. Machines can plane staves and cut heads, but they can’t arrange the staves in just the right way so the barrel won’t leak. Only a highly-skilled human can do that.

Those mushrooms we were discussing, fungi if you prefer, send out roots (hyphae) that penetrate into the wood structure and release hydrogen peroxide, a natural bleaching and oxidizing agent that helps break down the wood chemically, softening tannins and caramelizing hemicellulose among other salutary effects.

First in the pool (a fresh-cut oak is about 60 percent water by weight) is Aureobasidium pullulans, one of the species of common mildew, the same black stuff you clean off your shower tiles. As the wood dries it becomes inhospitable to pullulans which pulls out (okay, dies) and is replaced by another type that thrives in the slightly drier environment. One after another a succession of different fungal species (eumycota) and sub-species each have a go at it, including the one from which the medicine penicillin is made.

By studying these mushrooms modern science proved the superiority of a traditional cooperage practice – air drying – that had been widely abandoned in the United States after World War II in favor of kilns. Kilns remove moisture effectively but they stop the biological processes (fungal and bacterial) that make many of the wood’s flavor components available for absorption by maturing spirit.

In the first stage of seasoning, if humidity and other weather variables are favorable, fresh-cut logs will be left in the field for days or weeks. From there they go to a stave mill, close to the forest, where they are roughly broken down into staves and head pieces. From there they are shipped to the cooperage, where they are neatly stacked in the yard, fully exposed to the elements. There they will remain for anywhere from three months to two years, and in some cases even longer. Often the wood that is given only a short time outside is finished via kiln.

As you probably guessed, it’s a cost issue. You pay a premium for long air seasoning. Expensive whiskey probably should be aged in long-seasoned wood. The next time someone tries to sell you a certain bourbon or rye, ask them: “How long were your barrel staves air seasoned?”

You probably should be impressed if they even know what you’re talking about.